If you grew up reading and watching Little House On the Prairie. If you love wholesome historical romances featuring strong female characters like Little Women. If you love the #histfic works of Francine Rivers and Liz Curtis Higgs. Are you catching my drift yet?

If any of the above resonates with you, oh boy, you’re in for a real treat with the legendary Amanda Cabot’s latest release, Out of the Embers.

I solemnly swear I am stating a plain, simple truth when I say this is fantastic fiction. Whether you enjoy the genre or are discovering it today, this book is quintessence of literary excellence. Isn’t that a glorious word, by the way? If you’re a word nerd like me and had to look it up (I needed the perfect word for this one) you’ll appreciate this.

Gushing aside—I mean, that is what the review is for—I’m so excited to share this book with you today. You’ll also love this tour’s giveaway, so be sure to read all the way through 😉 First, though, discover Out of the Embers.

OUT OF THE EMBERS

Ten years after her parents were killed, Evelyn Radcliffe is once more homeless. The orphanage that was her refuge and later her workplace has burned to the ground, and only she and a young orphan girl have escaped. Convinced this must be related to her parents’ murders, Evelyn flees with the girl to Mesquite Springs in the Texas Hill Country and finds refuge in the home of Wyatt Clark, a talented horse rancher whose plans don’t include a family of his own.

At first, Evelyn is a distraction. But when it becomes clear that trouble has followed her to Mesquite Springs, she becomes a full-blown disruption. Can Wyatt keep her safe from the man who wants her dead? And will his own plans become collateral damage?

Suspenseful and sweetly romantic, Out of the Embers is the first in a new series that invites you to the Texas Hill Country in the 1850s, when the West was wild, the men were noble, and the women were strong.

PRAISE FOR OUT OF THE EMBERS

“Out of the Embers is part prairie romance, part romantic suspense. I can’t remember when I’ve enjoyed a book more. Amanda Cabot has written an intriguing, chilling mystery and she winds it through the pages of a sweet romance in a way that made me keep turning the pages fast to see what was going to happen next. An absolutely excellent read. And now I’m hungry for oatmeal pecan pie!”

—Mary Connealy, author of Aiming for Love, book #1 in the Brides of Hope Mountain series

My first foray into fiction—aside from fantasy—was historical romance. As a youth, I devoured everything written by Laura Ingalls Wilder, Louisa May Alcott, and L.M. Montgomery I could find. Later, I graduated to the more adult works of Francine Rivers and Liz Curtis Higgs. Why am I rambling about other authors? Because upon reading Out of the Embers, I now consider Amanda Cabot to have well-earned her place in the upper echelons of legacy authors. I could not find a single flaw with her work. Often I was far too busy being lost in the past with her characters to reflect on it.

Out of the Embers begins with the story of Evelyn and Polly, orphans who, after a devastating fire, become set adrift in the Texas Hill Country. In the land of big skies and bigger storms, Evelyn can only hope to get herself and Polly to safety. Enter the Clarks. Wyatt and his mother and sister take the orphans in, unaware of their pasts. But Wyatt’s no fool. He knows Evelyn is hiding something, and he hopes she’ll eventually trust him enough to reveal the truth. Out of the Embers may be a romance, but it’s just as much about the town of Mesquite Springs and its colorful cast of residents. With perfect pacing and immersive world-building, Amanda Cabot pulls you deeply into the daily lives of people not so different from us. All of them are seeking meaning and purpose in their lives. While some, like Wyatt Clark, believe they need to leave town to discover this purpose, others like Evelyn are simply grateful to find a home. I loved the contrast between Wyatt and Evelyn’s stories and all they represented. So many people are never satisfied in their circumstances, always looking over the next horizon. Only to discover, much like the Clarks, what they’ve been searching for was right in front of them all along.

Some sweet romances have a tendency to gloss over the uncomfortable and downright ugly parts of life. Life in the Old West was no picnic, and Cabot doesn’t gloss over the hard truths of life in the 1850s. Many things are simply accepted as “the way things are,” but this doesn’t hold true for everyone, especially the strong women at the heart of Cabot’s story. Several characters in Out of the Embers struggle with what we now call mental illness, and how poorly people understood their struggles at the time. There are also underlying hints of the unrest leading to the Civil War, mentions of Uncle Tom’s Cabin and the awful way people treated orphans and the derelict of society.  Rather than dwell on all these evils, Cabot chooses to focus Out of the Embers on a message of faith and hope.

There are so many interweaving facets to Out of the Embers that make it more than just another historical romance. I expected the themes of faith and romance peppered throughout Cabot’s narrative. What I didn’t expect to find was a colorful cast of characters with their own stories and a genuine beating heart at the center of it all. Some books breathe, I’m convinced. Some make you feel things or touch you in subtle ways. Others simply dazzle with prose or the author’s ability to bring the past to life. Amanda Cabot has done all these things and more with the first in her Mesquite series. I look forward to devouring the next series, and hope you’ll agree when I say Out of the Embers is as beautiful and perfect as the Texas Bluebonnet.

**I was provided with a copy of Out of the Embers by the publisher and this is my voluntary and honest review.** 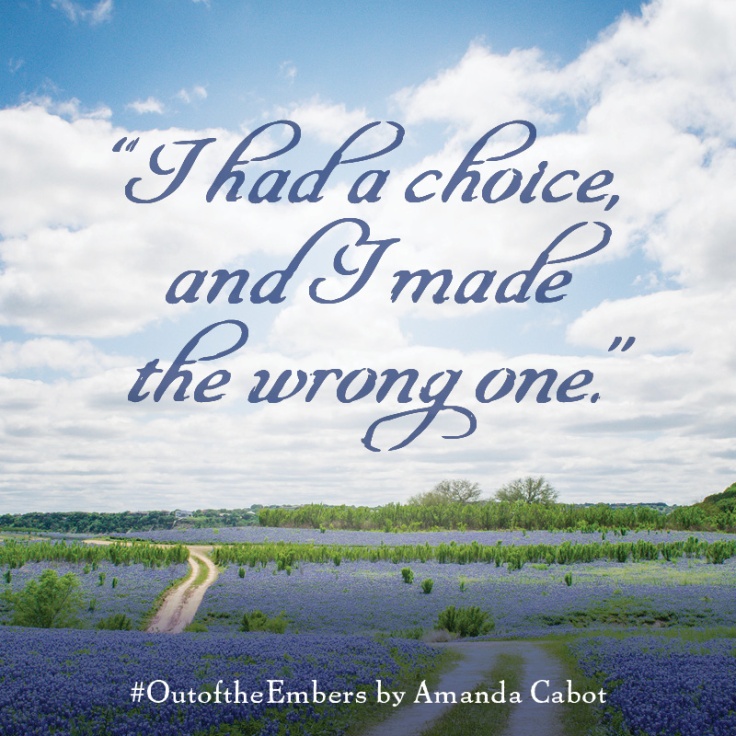 Amanda Cabot is the bestselling author of the Cimarron Creek trilogy, as well as the Texas Crossroads series, the Texas Dreams series, the Westward Winds series, and Christmas Roses. Her books have been finalists for the ACFW Carol Awards, the HOLT Medallion, and the Booksellers’ Best. She lives in Wyoming.

Copy of Out of the Embers + Special Hill Country Sweets Cookbook

Copy of Out of the Embers + Special Hill Country Sweets Cookbook

DON’T MISS THE OTHER GREAT BLOGS ON THE TOUR:

5 thoughts on “Book Review: Out of the Embers by Amanda Cabot”