In my YA Sci-Fi/Steampunk Novellas, we meet a crew of former Royals, the Miners who once served them. In Qeya, the crew was attacked by a mysterious alien force, then crash landed on the primitive world below. Trouble is, none of the adults survived and now a small band of children and teenagers must cross the boundaries their parents imposed on them to survive.

Thanks to Ohre, a miner, Qeya manages to eject the second deck of Datura 3 mere minutes before their ship and everyone they knew is blasted to space dust. Meet the survivors of second deck:

Qeya: 15, Red-head, The Orona (Healer) & Royal Princess and little sister to future King of Datura. Betrothed to Tamn, her best friend, since her birth. As Orona, she has the power to heal the deepest wounds, both inside and out. Can wield her scythe blade well enough she teaches the other children with Tamn.

Ohre: Age Unknown, Miner, Inventor. Wears tattoos unique to markings of his true clan. Grew up with a wild clan in the deepest core of Datura before a disaster left him orphaned. Found by Old Brien and raised alongside Adi’s clan. In love with Qeya. Weapon of choice : gauntlet he modified himself. Saves the survivors of Second Deck countless times after the crash.

Arvex: 17, “The Golden Prince” & Qeya’s older brother. Together they are meant to rule Datura as King & Orona. Mated to Hanea. Before the crash, Arvex skirted by doing as little as possible, letting his sister manage the children. He will come into his own as King on Nukvar.

Hanea: 16, Silver-gold haired, The Weaver & Arvex’s mate. Tamn and Min’s little sister. Hanea has always been vain and obsessed with her prince. After the crash she doesn’t speak for months. Eventually becomes a strong pillar of strength for Arvex and the others as the Weaver.

The Twins: Gem & Menai. Qori’s little brothers (their younger sister dies in the crash) Arvex & Qeya’s first cousins on their father’s side. Always up to trouble, they easily transition to wild life on Nukvar after the crash and emulate Ohre, their hero.

Kahne: Purple eyed, Jymee’s big sister, old friends with Tamn from before. She and Bruv were the best scythe wielders before the crash and always at odds. On Nukvar, they become allies and then friends. Possesses enhanced cognitive abilities.

Jymee: 4, Kahne’s baby brother. As youngest of the surviving crew, Jymee entertains the others and helps give Hanea purpose. He begins a mural on the cave walls of their base on Nukvar that grows more and more sophisticated as the Memories come to him.

The shuttle crew went missing in Qeya, but *spoilers* reappear just in time to save the kids. Among them is Qeya’s betrothed and her best friend, Tamn. But the Pioneer’s journey hadn’t been easy and not everyone may survive before the end.

Captain Xame: Arvex & Qeya’s Uncle (mother’s brother), Once kept the peace between scattered miner clans on Datura. His friendship with Old Brien is what allowed their quick escape from the invasion on homeworld. Suffered heavy scarring from past missions.

Kall: Second Mate, extremely loyal to Captain and crew to a fault. Science officer on the Pioneer and Datura 3, he is an expert on star systems and the worlds surrounding them. Has had a long feud with Remin, though they work together.

Remin: Adult Miner, Old Brien’s adopted son, much like Ohre. Covered in more Scars and Tattoos than any other miner on the ship. Responsible for transfer of resources from missions to Datura 3. Hates the Royals.

Adi: Dark green eyes, bald with unique blue chole tattoos. Tech genius, Has a love/hate relationship with Tamn. Old Brien’s granddaughter and raised alongside Ohre, Adi was taught the secret to converting chole into a substance the ship uses for fuel & powering their weaponry. Favors blasters and gauntlets when she can’t use her fists.

Tamn: 19, Min & Hanea’s older brother. Royal Prince from a great family from Northern Continent on Datura. Weapon of choice: Retractable Scythe & miner knuckle blade. Betrothed to Qeya since her birth but as she grew up they became best friends. In love with her in every lifetime they have shared. The Navigator, responsible for communications and relations with hostiles, often forced to use his expertise in warfare to defend both crews.

Qori: 18, Mated to Min, older sister of Gem & Menai. Their youngest sister died in the crash. Record keeper of every mission and discovery.

I hope you had fun diving deeper into these characters with me and are excited for the adventure! The struggle for survival continues in Tamn (Heaven’s Edge #3) 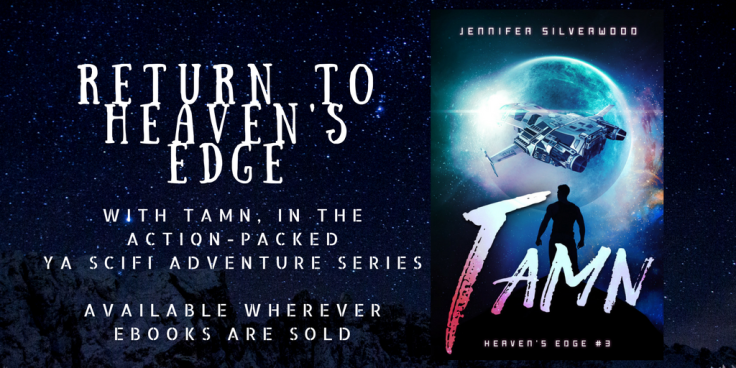 Collect the Heaven’s Edge Novellas & join a motley crew of scavengers and formerly royal pirates as they struggle to survive a hostile world. Qeya & Ohre are available wherever eBooks are sold.