I like the number 3 and the “rule of 3’s.” That’s why there are three episodes in my new urban fantasy, Angel Blue. There are a proposed three seasons for the Seven Deadly Sins serials. Also, for three lovely days, Xpresso Book Tours is hosting a book blitz for the big release! I hope you’re ready to help me celebrate the “power of three.” So get ready to sit tight and enjoy your three-day crash course. 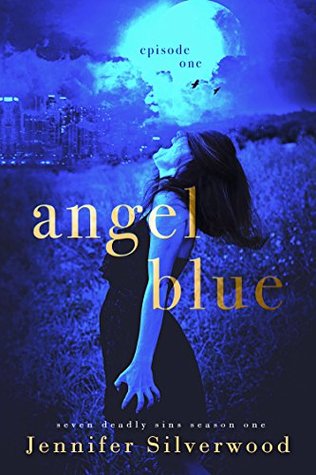 All Eanna wants is to forget the night she lost everything, but fate has other plans. A lifetime ago, the cursed burned her home and everyone she loved. Now, she’s haunted by a dangerous legacy.

Her guardian, Etlu, is determined to make Eanna into a queen, even if it means sacrificing his happiness. He pursues her into a human bar, but he’s too late to save her from herself.

Wil and his sister, Isabol, have been searching for the chosen princess. Wil finds more than he bargained for in Eanna, especially once her powerful guardian shows up. There can only be one outcome when chosen and cursed collide: a world bathed in fire and blood.

(Angel Blue is a serialized adult urban fantasy novel consisting of three episodes. This is season one of the Seven Deadly Sins series.)

A GAME OF HOUSES

For ten generations our people have been called the Chosen.

The first chosen were like gods to humans. We were the rulers, and kings among men. The world changed after what man called the Dark Ages. Power was shifting. Once we were leaders among the humans, heroes of old and men of renown, a vast sprinkling among the stars that I love. The world it seemed, was our own, to watch over and do with as we pleased.

We are a dwindling race now. Unlike the cursed, we are unable to blend in with the humans any longer, and for the past three centuries have remained in hiding. We live by the old ways and survive. Here, in the isolated northern forests of the new world, we thrive. Much has changed since then. Eleven hundred human years later, I still feel the pain of that night that changed the course of my destiny forever.

KURGAL – House of the Mountain

Led by NINURTA – Lord Who Completes the Foundation

The Kurgal live deep in the Himalayas. Here, they are still revered by neighboring humans, who make an effort to protect them. The chosen keep the outside world from coming in. Etlu brought Eanna here a century after fleeing the Carpathian Mountains. It was a place familiar to them both, with its impossible peaks, but far more dangerous and foreign. Ninurta taught Eanna how to inflict pain and then heal it, and he taught her self-control for her rage. Meanwhile, Etlu learned all he could of the cursed’s movements in the countryside. For a time, he built allies and led their armies to prevent the giant beasts from destroying human villages. He began to realize that his house did not have far-reaching enough abilities of control and began to grow even more discontent with the sarrum.

SHIIMTI – House Where the Wind of Life is Breathed in

Led by NINLIL – Lady of Airspace

The Shiimti live deep in the jungles of India. There they still live, where they began a lost civilization man has yet to uncover. Their palace holds many of India’s treasures and clues that might possibly be directed back toward the chosen. Here, Etlu and Eanna come to visit after they leave the Kurgal. The Shiimti are a far larger house, yet even more secretive. The only reason Etlu and Eanna are allowed inside is because both are considered pure-blooded, but Ninlil also sees secrets in Eanna’s heart. She is the first to have any inkling of just who Eanna is.
Among the Shiimti, women rule over the men, and there are three layers to every member. The first is the outer persona they show strangers—welcoming, but aloof and cool. The second layer is comprised of the secrets deemed worthy to share, but only to those in the inner circle. The third is kept guarded above all else—the soul. Shiimti is the only house that believes they all lay claim to their own souls, because they face the present darkness every day in their jungles.

EBABBAR – House of the Rising Sun

Led by NINGISHZIDDA – Lord of the Artifact of Life

House Ebabbar lies hidden in a small oasis within Iran, where Sumer, the society the watchers created, began. It is mostly an underground city, beginning from the base of a lost ziggurat. The underground world is actually a paradise and a world of beauty. It is here that the Ebabbar keep most of the old relics and scrolls. It is the best defended city and is considered a safe haven by others in their society.

Led by NINHURSAG – Lady of the Mountainhead

The Ekur are the most numerous of the houses. They are also the proudest, for most lesser come from this house, and serve the “pure-blooded” chosen. To the Ekur, to serve is the greatest honor. Most of the soldiers and weaponsmiths also come from this house. Ninhursag, their lady, is a proud warrior herself, and of extremely high stature, standing eight feet in height. Their base of operations is in Siberia and extends far into the northern lands that man deemed uninhabitable.

The Emeuranna are led by the sarrum and his people. Theirs is the only surviving chosen castle in the Carpathian Mountains, sheltered from the outside world. The old ways are kept mostly intact here, as is custom for the High Lord’s seat. Here, the Council of Seven makes overall decisions for the rest of the chosen.

One of the last new-world houses left in power, hidden deep in the Amazon rain forest, and the source of the legend of El Dorado. They are by far the richest of all the houses. They are bronze-skinned, and every one of them is black-eyed. They have not intermarried with the humans hardly at all, because they do not believe there is a need. Unique to all other houses, save the rumored surviving eighth house, their memories are collectively shared if they desire, and their movements are always calculated. Any time they intermarry with other houses, it is a very chess-like move, with the aim to bring back strength to their kind. While staying among them, Eanna learns she is closely related to them.

Led by NINMULMULLA – Lady of Many Stars

The Gisnu were the first of the thirteen houses to journey across the lands to the ever-growing and developing New World. They were also the first beings to settle there, after the Native Americans. Once based in the Northlands among the Vikings, the Gisnu set up their home in the north of what is now Canada. It is here that they have remained, and for a thousand years, they have protected the forests and peoples around them as best they could. They are more advanced than any of the other houses, keeping themselves updated with the latest technology.

Jennifer Silverwood was raised deep in the heart of Texas and has been spinning yarns a mile high since childhood. In her spare time, she reads and writes and tries to sustain her wanderlust, whether it’s the Carpathian Mountains in Transylvania, the highlands of Ecuador, or a road trip to the next town. Always on the lookout for her next adventure, in print or reality, she dreams of one day proving to the masses that everything really is better in Texas. She is the author of three series–Heaven’s Edge, Wylder Tales and the Borderlands Saga–and the stand-alone titles Stay and She Walks in Moonlight. She plans to release her first serialized Urban Fantasy, Angel Blue in August 2018.