Can’t believe we’re almost at the Grand Finale! I hope everyone’s enjoyed the tour, even though we didn’t make as big of a hullaballo this year. I think we can all agree times have been crazy, but they’re also a’changin’. As reader trends and demands shift, we try to shift with it. But it’s fun to come back and do an old-fashioned blog hop. We love our fellow authors, and we hope you will too this holiday season!

Today, I’m giving a special shout out to the incomparable Melissa Wright, author of The Frey Saga. I devoured her first two Frey books before gathering up the courage to message Mel about writing. I didn’t expect much in return, but I wanted advice as I sought to publish for myself. Melissa more than wrote me back, she took me under her wing. Through thick and thin, ups and downs, in writing and in life, I am so lucky to have found a true friend, mentor, and big sister in Mel.

Turns out she’s not only an awesome person, but a fantastic writer 😉 Her latest release, Between Ink and Shadows is simply gorgeous. Seriously, the print copy has many fun hidden treats for fantasy readers. I recently started reading BIAS and I can already tell I’ll love this just as much as I did Seven Ways to Kill a King. More about Melissa’s brand new series, plus the giveaway below!

Between Ink and Shadows

Nimona Weston has a debt to pay. Her father’s dealings with the dark society known as the Trust cost Nim her freedom. There’s one way out of the contract on her life and that’s to bide her time and pay the tithes. But when the Trust assigns Nim to a task in the king’s own castle, her freedom is not the only thing she’ll risk.

Warrick Spenser has a secret. As king’s seneschal, he should be the last soul in Inara to risk association with dark magic, but long-hidden ties to the Trust are harder to shed than simply cutting the threads. When the Trust sends a thief to his rooms, Warrick thinks he’s finally found a way to be rid of them for good. But Nimona Weston is hiding secrets of her own.

Magical contracts, blood-debt accountants, and a deadly game. A dark and twisty fantasy that pits magic against kings, perfect for fans of Sorcery of Thorns and Serpent & Dove.

It was too late to think, too late to be clever. She was trapped in a dark alcove, the pressure of Calum’s magic nearly crushing her beneath its power. But the power swelled, and Nim’s nausea rose again.

It was not Calum at all. He was only holding her. The magic was something else, something he wanted her to feel.

They’d gone lower than she realized, farther toward the depths of the undercity. Toward the queen’s lair. The magic always flowed and ebbed, but Nim had not felt it, an unfathomable power that had drawn her, that had allowed her to believe she was only walking through the corridors and not into another trap. There she was snared, so it rose toward her, swelling through the room and washing over her. Her body came alive with tingling heat, her flesh on fire beneath her clothes. It wanted to burn her, wanted to devour whatever was not part of it. Whatever did not belong.

It was the queen, the current head of the Trust.

His body pressed near hers, holding her against the wall. In the enveloping darkness, she felt him lean closer, sensed his face slide beside hers.

“To remind you,” he said, his voice a caress, so at odds with the way the magic was suppressing even her knowledge of how to breathe. “Should you be tempted,” he told her.

Should you begin to believe you might someday get away.

“I own you.” Calum’s whisper strung tightly around her, a physical thing. A promise that she could never be free.

Other Books in the Series 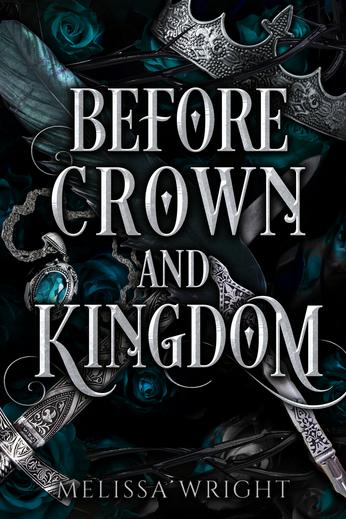 (Linked to an Amazon affiliate link.)

Melissa is the author of more than a dozen YA and fantasy novels, including The Frey Saga and SEVEN WAYS TO KILL A KING. She is perpetually working on the next book and encourages readers to stay updated on works in progress at Instagram and Twitter. Contact her through the web at http://www.melissa-wright.com.

One winner will receive a $75 (USD) Amazon eGift Card