On Tour with Prism Book Tours.

Read the exclusive excerpt and enter the giveaway below…

Wolfsbane and his daughter Resha are on a never ending quest in the Wylder Mountains, to wipe out the wolves who destroyed their village. Before their enemies stole everything she loved, Resha cared for little beyond learning how to be a hunter. After, she learned a hunter must be prepared to fight as well as flee. Now she cares for nothing but revenge.

Until she discovers two majikal humans half frozen in the forest. Resha has a choice, to follow her instincts and leave the strangers to the wolves, or save them. Yet the enemy is on the prowl and there is little time for Wolfsbane’s daughter to find safe haven before they are discovered.

There was a time when she did not hate her father, when her only concern was checking her traps and learning knives from Grandfather. But this was before their village on the ridge of Mount Grimm was attacked and destroyed by their enemies. After that she learned a hunter’s claws must be longer and much sharper. A hunter must always be prepared to fight as well as flee, Father said.

“Stay close, Resha!” her father hissed, drawing her attention to their bleak present.

They had been on the run ever since the attack on Mount Grimm. An entire moon had passed since half the village was murdered, including her brother Vilhelm. If any others survived they were hiding deep in the mountains. The beasts had always been a threat to them. But recent attacks alluded to a new hunger, to wipe out the last humans living in the Wylder Mountains. Some in the village had blamed Wolfsbane and his quest to avenge Grandfather’s death. Those who might still have blamed her family were dead.

Now all that was left to them was this hunt, her first true hunt. Before this she had been little more than a trapper, practicing her knife on the small creatures she found in the woods near their village. Every time she ended a hare or tripe’s life, she felt nothing of the thrill the other children did.

“Sometimes I wonder if you are too soft to be a predator after all.”

Truly, Father’s words resonated with her far more deeply than she wanted them to. A part of her was so much a child. She had never plunged her knife into the heart of a true beast. It was her greatest fear she would fail in a task Vilhelm would have fulfilled without flinching. Now the legacy of vengeance was left to her hands and the dagger Grandfather made for her last moon day.

Resha took a deep breath and watched it hover in the freezing air. The territory they hunted in was new, closer to the lost city than most of their kind had ever dared to trail. Her father, Wolfsbane, said they were searching for signs of man and beast. She watched the way Father crouched and inspected every curve of the path the tracks had made. When she looked down it was difficult to see anything but shadow and snow. Yet she could almost feel the faintest traces of their prey’s footfalls. It was the smell and the warmth Wolfsbane was following now.

Her attention was diverted by a bright splash of red along the roots of a nearby tree trunk. Her stomach clenched at the thought of the berries hanging from those thin branches. Mother told her to forage whenever they came across nuts and rare plant life. Just because they were hunting, didn’t mean she couldn’t savor a morsel. And there might even be a chance she could snatch enough to save for when they made camp. She glanced up, hopeful Wolfsbane would not notice.

She poked through the fur wrappings keeping her palms and wrists warm, making quick work of the winter berries. Meanwhile, she kept her eye on the glow of torchlight up ahead and slipped the rest into the satchel attached to her belt. The juice stained her fingers a faint purplish hue and she licked them, hoping to hide the evidence. Her eyes shut involuntarily as she drank in the sweet taste. A hand grasped her wrist roughly and pulled so she was forced to face Wolfsbane’s grizzled visage.

“Foolish pup!” he growled. “This land is cursed and you are a fool to touch it! Do you wish to fall asleep forever in these woods?” With every word he squeezed her wrist tighter, drawing tears from her eyes.

“Wolfsbane!” her mother interrupted, gripping his arm tightly with her free hand. “You will not harm our last remaining child. She is hungry and we have not stopped for three days. Leave her be.”

They stood together against the torch, the light illuminating the sickly rage in Father’s eyes and the fear in Mother’s. Resha tried not to give into that same fear. Father would only see it as a weakness. He was too deep into the hunt, and addled by grief to know better.

So she lifted her chin and willed her tears to stop. To say anything would only spark his fury again. Instead she kept her eyes locked with his. Mother’s fingers crept higher, resting over both her wrist and her father’s tense grip. His anger faded, and for a moment, Resha saw the love her father had for her. He opened his mouth to speak and hope bloomed in her chest.

That was the moment a chorus of howls rose together like a nightmare in the woods around them. The cries began ahead of them, further up the valley. Often she had heard them in the distance as a small child within their cottage. Never had she heard them so close and so far away from all she knew.

Her breath came in short, violent gasps as her heart pounded in her ears. These were the beasts who stole everything from them, the ones they had been hunting ever since. For the first time, Resha felt the stirring of the hunt in her blood.

The First Book in the Series 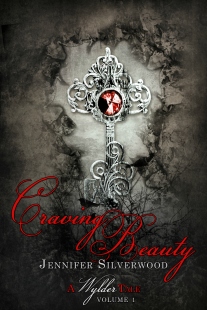 Vynasha has spent the last four years tending her mother’s roses and looking after her nephew. The fire that killed their family has left her scarred and put Wyll on the brink of death. Soon the first frost will come down from the mountains and she knows this winter will be his last.

Until a strange beggar appears on the road, telling her of the majikal Source that can heal her Wyll. With nothing left to lose, Vynasha braves the forbidden Wylder Mountains to seek out a cure and her fate.

A lost kingdom is uncovered by an equally lost girl, but the castle is not abandoned as she believes. Shadows cloaking unseen eyes watch. Tapestries whisper from the hidden corners, wondering if the one to break their curse has come. And a hungry beast waits, ready to devour her soul.

Jennifer Silverwood was raised deep in the heart of Texas and has been spinning yarns a mile high since childhood. In her spare time she reads and writes and tries to sustain her wanderlust, whether it’s the Carpathian Mountains in Transylvania, the highlands of Ecuador or a road trip to the next town. Always on the lookout for her next adventure, in print or reality, she dreams of one day proving to the masses that everything really is better in Texas. She is the author of the Heaven’s Edge series, Stay and Silver Hollow.

Other Books by the Author