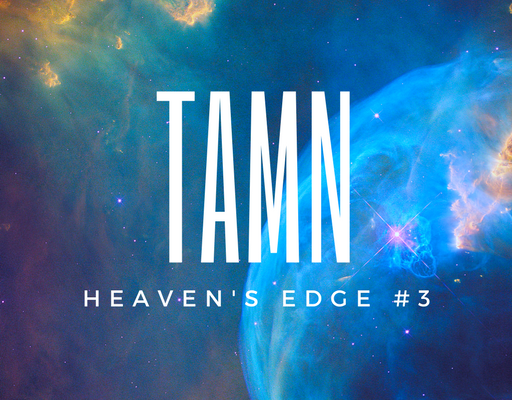 This year I’ve been working on getting my writerly priorities straight. Besides finishing the Wylder Tales trilogy, I am rewriting Silver Hollow and working on the third Heaven’s Edge novella: Tamn. You might remember my mentioning Tamn back during NaNoWriMo. Needless to say, other projects took precedence and Tamn fell to the wayside, but like Sister Act, I’m getting “back in the habit.” Hope y’all enjoy today’s teaser 🙂

My life both began and ended with a crash.

“Strap in! Shields are down!” Captain shouted over the alarm blaring throughout the shuttle.

I barely had time to make sure the rest of my crew was strapped in before the second shudder hit their outer hull. “Qori, hang onto our chole packs!” I shouted, the same moment Adi, the miner swung in front of me, wrapping an arm around my waist.

“Hang on to your scythe, Royal,” she said with a cheeky grin. Her arm was the only thing that kept me from colliding with the pipes and gears overhead. For a moment, we hung together suspended midair, legs flailing, as the lights flickered inside the compartment.

I couldn’t find my brother in the blur of shapes, could only hope the straps held fast.

Adi used her miner strength to curl me into her body until we were a tangle of limbs and we slammed against the metal grating above as our shuttle impacted with the sea.

Alarms blared and I turned my head, trying to keep calm as I met Adi’s solemn eyes. She was always the one to make light of any situation with her sharp words. But we had just been shot down by an unknown enemy vessel after our brief visit to this hostile world. There was no precedent for this.

There had been no warning, no terms, nothing about our attackers that we recognized. So far from the Core Worlds, we had grown used to the bands of smugglers and pirates, the dredge of society. Other worlds had been peaceful and independent, but hostile to invaders. Some worlds had seemed totally barren and inhospitable to sentient life. When we discovered this new world, we thought maybe luck had finally returned to us. We were wrong.

Our enemy’s ship was at least three times the span of our shuttle, more than double our mothership, Datura 3.

Will they attack the others?

Adi helped me find my footing and pounded my chest with a sharp hit. She flashed a smile that didn’t reach her eyes. “Chin up, Royal. Let’s get the others out of here before you faint.”

Her words did the job of pulling my head out of memory and reminding me of the role I was born to fulfill. “Right, grab the gear.” I turned to find the others falling from their harnesses and lifted my brother up by the hand. We exchanged a brief, meaningful glance, searching for mortal wounds. “Time to assess our damage later,” I said. “Gather what supplies you can.”

Captain pressed his hand to his side but slung a pack over his shoulder. “You heard Tamn! Get it in gear!”

This was what we had trained for. We had been through worse before, had lost crewmates a time or two since I Ascended and joined the Pioneer. I picked up my belt scanner and checked our position, then led the others to the leaking hatch.

No one spoke as we left the shuttle behind and swam through strange, thicker waters.

Like what you read here? Check out the first two novellas in the series