Happy #teasertuesday fantasy avengers! I’m pleased to report that I’ve been busy at work on Blackbriar Cove this week, which means lots of free writing + research. For example, I was happily tapping away at my keyboard when a new character appeared on the scene. Said character will play a huge role in the next book in this series, so of course, I had to dive into the rabbit hole.

After an hour of determining the meanings behind his names, ties to British and European folklore and pop culture 😉 I was able to come back to the scene. Only to realize it was bedtime, lol. Which is how it often goes in these early world-building stages. Also, I’m planning the Blackbriar Cove cover reveal with Prism Book Tours woohoo! Sign-ups for my fellow bloggers will go up in the next month or so, but I’ll be sure to share links asap for my #fantasyavengers. Hope to see y’all there! Meanwhile, enjoy today’s teaser. Please excuse any grammar/spelling errors and happy reading 🙂

*major spoilers for silver hollow below*

Jessamiene Dameri Nimue Wenderdowne had lived a little over two-hundred years into her second life and was queen of one of seven magical kingdoms left on earth. She would have liked to have claimed credit for the whole “becoming a badace queen” thing, but Amie, having lived most of this life as a hexed human, was well aware of her limitations.

For instance, if it hadn’t been for Uncle Henry’s intervention, or rather his sending Emrys to intervene, it could have all ended quite differently.

“Like an iron bullet in my chest,” she muttered.

She tilted her chin to the moonlight and studiously ignored the voice, returning her focus to the earth beneath her fingers. Pushing her borrowed moonlight into the earth, Amie watched the seeds push through the soil, translucent and shining like starlight. The scent as their silver petals unfurled filled the air with a spicy blend.

You know I’m right, love. Aren’t I always right? he teased, his words closer then, a caress against her ear.

Amie smoothed the soil between blossoms and rested her back against the stone arch. “I didn’t come here to argue with you again,” she hissed, watching as pixies fluttered near as bees to pollen, eager to touch her creation.

Emrys’ laughter echoed around them, both warming that ache in her soul while tugging at the barely mended seams.

Bitterhelm indeed. Her last name in that first life seemed to have carried over into this one after all.

Who said anything about arguing? Emrys retorted. It was always going to end this way. Nothing you could have done to change it. Quite right, too. About time I lived in the shadows and let you come back to the light… well, sort—of lived. I wouldn’t exactly call this living.

Amie rolled her eyes at her ghostly boyfriend’s words. No matter what he said, she’d lived long enough to know nothing was as simple as the storybooks claimed. After all, her kindly Uncle Henry, so eager to install her as co-ruler over Silver Hollow, had not only been her father in this life but ordered her death in the first one. To complicate matters, her tall, dark and handsome hero had also betrayed her when he switched to the dark side. Only Emrys’ love for Nimue had given him the strength to help her end his life.

Half truths and more brooding again? the voice said with a sigh. When will you believe when I say you’ve always been Nimue as much as Jessamiene to me.

“When you stop trying to convince yourself, idgit,” she practically growled back.

Emrys’ spirit withdrew from her at this with a gusty sigh, as she had known he would. And the ache in her chest, that emptiness she continued to battle, tore open a hair deeper. The earth trembled faintly beneath her and Amie clenched her fists before her temper damaged the beauty blooming before her eyes. She glanced up to the moon and silently cursed her grandmother Titania, for passing along the talent for mooncraft.

One year had passed since Amie Wenderdowne claimed the power of the gate and she was no closer to claiming total control. Combined with her inherent affinity for the sun, Amie was in a constant flux between night and day. Too much power for one person, especially a half-human. No matter who she might have been once upon a time, Amie would always feel like a stranger in her own skin.

Her pixie friend, Puck, came barrelling past her vision to crash land atop her starlit creations. A cloud of fine glitter puffed out and coated Amie’s face with a fresh sheen.

She coughed and sputtered as the pixie righted itself. “Oh, thank you so much for the fairy dust bath. I swear, Puck if you are trying to make me hallucinate again…”

Puck chortled with a sound more like jingling bells, like the rush of the wild winds it rode. Still, it didn’t stop her friend from waving its blue-tinted arms furiously.

Puck stamped its foot, causing a fresh cloud of pixie dust to rise above its head. Amie batted the nastiness away, unwilling to inhale another mouthful. The last time Puck unwittingly—though she suspicioned the pixie rarely did anything perchance—drugged her, Amie hadn’t woken until days later.

Obviously fed up with her lack of understanding, the pixie flittered up to Amie’s hand, snatching hold of her thumb as it pressed the urgent thought, ‘Gold Phoenix.’

Amie bit her lip to hold in a curse, and standing, settled Puck to perch on her shoulder. “Might as well come with me for this.”

Going so soon, love? Emrys’ voice crooned, a whisper of wind against her skin.

Amie clenched her fists. “I’ve already stayed too long,” she whispered back. Puck didn’t interrupt, thankfully, though she felt the pixie’s curiosity flirt over their connection. Tiny fingers gripping the lobe of her ear. Amie ducked around the side of the garden, heading for the door no one knew about. She had made certain of it.

Her bare feet made no sound as she shut the door behind her and entered the underbelly of the burnt out west wing of Wenderdowne. 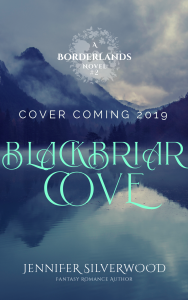 “In a single night of madness, Amie won the battle, and lost the two people she loved most. As she struggles to be the queen her people need, her family band together against the hidden threat at their borders.

Haunted by the ghosts of her past, Amie strikes a pact with an ancient being called The Storyteller. In order to see Emrys again, they must put aside their blood feud, and cross the veil to a place of spirits and monsters.

Blackbriar Cove is a land where superstition and chaos reign, and spirits plague dreams. A dark curse has twisted the Unseelie who once lived in the home the Blackbriar twins vowed never to return. But death is not the end in Silver Hollow, and the war for the Borderlands has only begun.”

Add Blackbriar Cove to your Goodreads

is available where eBooks are sold