Two months later, I am still hard at working out all the little plot kinks and story beats of Bound Beauty, Vol. 3 of the Wylder Tales Series. Life has kept me busy like you wouldn’t believe, between work, taxes, traveling & keeping up with my little guy. But I took a lot of time to sit on my stories and hash them out in my mind. Sometimes the best thing you can do is soak in as much lit & beauty around you. Today’s teaser is hopefully a reflection of all that “sitting” and reflecting.

Gooseflesh pimpled on her arm as a high-pitched wail echoed through the forest, followed by the howl of a wolf.

Vynasha scrambled up and ran in the direction of his howl. The forest was broken near their campsite, forcing her to scramble over mammoth trunks with her claws. Every leaping step forced leaden muscles loosen while fresh energy surged through her blood. Stray branches sliced her skin as she broke through, choosing speed over caution. She ran until another beastly cry grated against her ears and shifted course to follow.

Fear warred with rage as she pushed blindly through underbrush and pitted snow. She stumbled as her right foot sank to her thigh and clawed her way up again. Tears sprang in her eyes as the large white Wolv danced into her line of sight, pursued by a beast twice its size.

The poor creature who attacked the Forgotten Village had been younger, sorrowful for the pain she inflicted in her small, bear-like shape.

Not this beast. A thick billowing mane of white hair streamed from a horned, fanged monstrosity fierce with vengeance. A voice hovered on the edge of its guttural roars, bellowing from a tawny furred chest, thrice the breadth of any she had seen before.

Even Father, her mind betrayed.

“Get up!” she commanded herself as she managed to climb out of the sludge and onto unsteady feet.

Baalor’s white fur was matted red along his back already, but he stood firm, crouched low as he sprang up onto the beast with raking claws.

The beast’s howl was almost man-like then, and a male voice teetered at the edge of her conscience…

‘You kept us prisoner!’

“Stop!” Vynasha lifted a hand as the beast slung itself against nearby tree trunks, crashing back into the thicket. The Wolv yelped and whined in pain. She saw red.

The beast rolled back onto four paws and heaved a great gusty sigh, almost like laughter. As it settled onto its forepaws, ready to pounce for the final kill, the trapped soul within crowed in triumph. It did not see her until the Curse Breaker was standing between the beast and his prey.

The beast rammed against what seemed an invisible wall. One second it was leaping up in the air, then the air pushed back. Vynasha’s hands glowed silver as she held her palms forward. The power was back, along with something more, a raging force that made her howl at the moon.

The beast cowered at her command, though he growled low. A broken voice brushed against her thoughts, ‘No right! No right to take my kill!’

Aloud, Vynasha spoke, “He is not your kill. He is mine.”

The beast glared with amber eyes, a shade darker than her own.

With her hands still raised, Vynasha took another step, ignoring the creature’s wince. “Why have you come?”

Its gaze flickered with the man the beast had been before. Another pause as it replied, ‘We could not find you. But then you called to us, so we came.’

Vynasha hesitated and her silver skin softened to pale violet. “Why did you attack him?” The beast’s anger was so full and raging, Vynasha bit her lip to keep from the fight it clearly wanted.

After another moment, the man within overcame his cursed instinct. ‘His fault. Blood feud.’

She thought she could see a life before the monster, buried deep beneath an age of hatred, of a cottage on the mountainside and the hunt. But then the beast pushed onto his feet, and a little more of her strength wavered. She remembered suddenly that she was exhausted, and so unprepared for what he asked her next.

“I—I don’t know how,” she said. She wished she could take it back, but it was true. The beast howled with her words, echoing her despair. 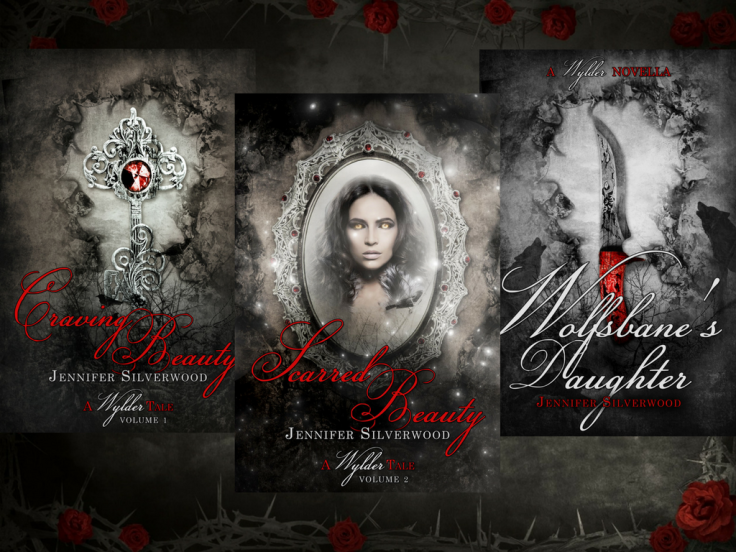